During the 1980s, we worked with Geotech AB to develop a wireless CPT System that has distinct advantages over conventional cable systems. One advantage is that the CPT rods can be pulled in up to 9 metre lengths rather than a 1 metre length, greatly increasing speed for deployment. The most advantageous component is that without the cable inside the cone rods, it permits the operator to inject mud through the rods and it discharges above the transmitter through a ported cone rod. This system is patented by Foundex. This mud injection, along with friction reducers, provides the necessary lubrication to virtually eliminate the friction of the cone rods in the formation. This allows penetration depths that would be impossible to obtain with a cable cone that cannot eliminate rod friction aside from use of friction reducers.

The cost savings are apparent with a CPT system that does not require a drill out, when refusal is met due to rod friction and not point resistance. Especially in offshore projects where operation costs are considerably higher than land-based operations.

In 1998, we purchased a fourth generation Geotech cone system which has four channel transmitters; point resistance, skin friction, pore pressure and inclinometer measurement. It is as reliable as its predecessors, with an improved software package. Foundex has also developed an offshore suction anchor system. This system provides 10 tons of reaction force and isolates the cone from any movement of the offshore vessel platform providing accurate results and data.

We have been using the manual Geotech Nilkon Vane system since 1981, and in 1998 we purchased their new electronic field vane. This new system interfaces with a computer for data acquisition as the test is being performed. The vane instrument controls an electric motor and chuck that rotates the vane at the desired rate and records torque values and rotation speed 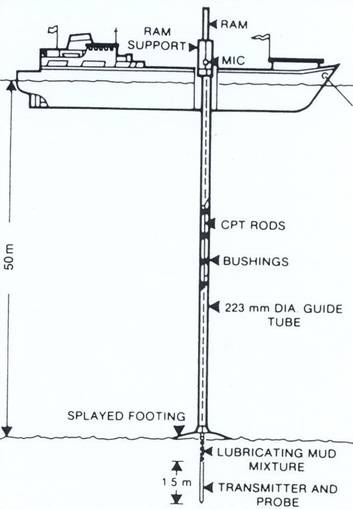